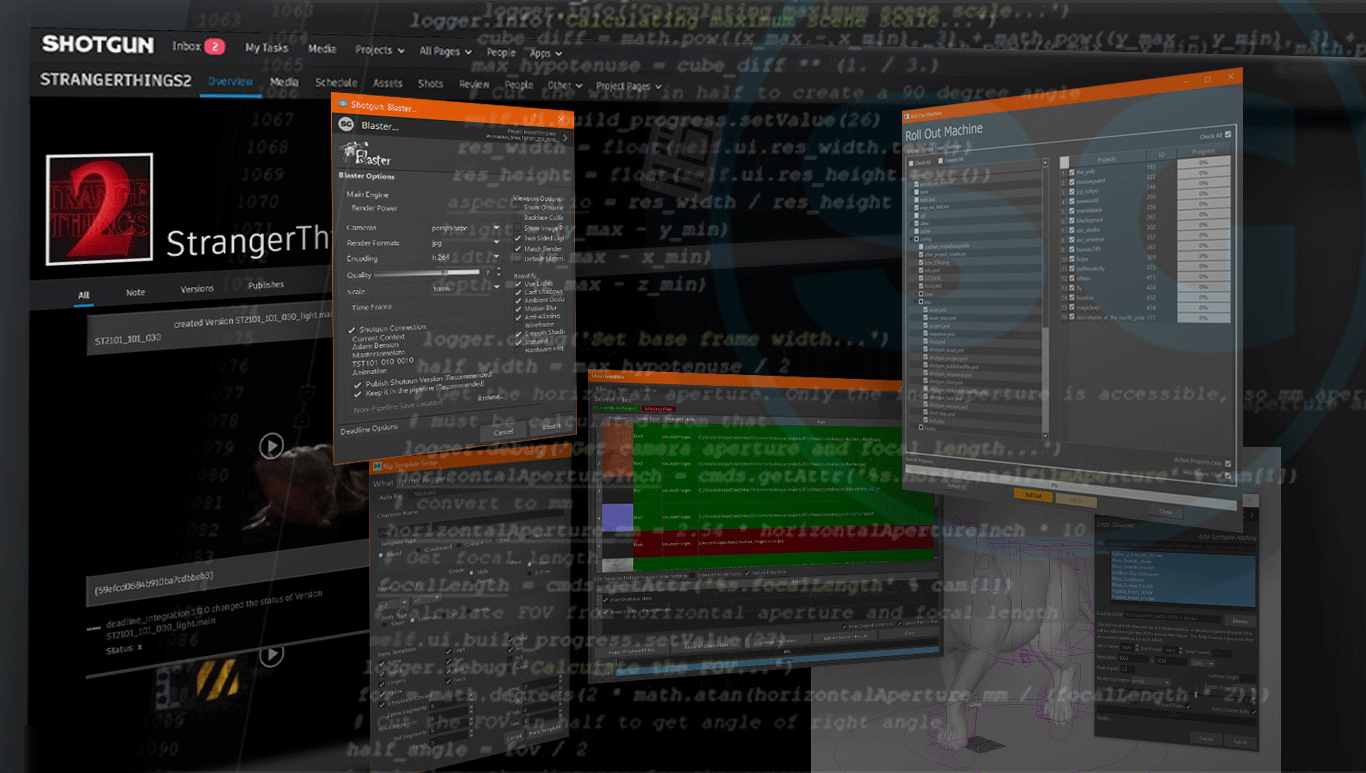 Programming is one of the many things I do in my career. I have programmed an entire Shotgun pipeline for Aaron Sims Creative, and developed a Nuke and Maya pipeline for Masters FX before that. I have developed a time-tracking system that works directly in most DCC (Digital Content Creation: Maya, Nuke, Mari, Photoshop, et cetera) applications, with time being checked when artists open or save any file. I have developed Shotgun publishing tools for their various DCC publishing systems, and have developed an internal publishing system that supersedes Shotgun’s own system, allowing designers to work lighting fast and dirty, while still maintaining proper file naming and storage procedures. I have developed roll out tools for mass distributing new pipeline configurations, clean-up tools that go through a folder structure and gets rid of excess junk that a studio is likely to never need again once production ends.

I have developed artist tools for Maya, Max, Nuke and Photoshop; things like randomization tools that check for interpenetration, paint references onto a surface by color, as well as inter-office tools for managing files, ingesting new materials and running batch procedures on bulk items.

Apart from the tools creation and pipeline development, I also do a lot of character rigging and dynamics, both of which often require, or at least benefit from a significant amount of coding. I have developed my own rigging tools and scripts to speed up development of characters and simulations. The long and short of it is, I do a lot of work with code. Work smarter, not harder.

I started programming in the early 80’s when I was only about 8 years old. My dad would bring in his “laptop” computer from work; a big brick the size of a workstation of today, made by Compaq, with an 8” monochromatic screen and two 5.25” floppy disc drives. My dad paid me $0.25 an hour to type code in from some dot matrix hard copies and save them onto the floppy discs. I have no idea what language it even was, but it lead me to start learning BASIC shortly thereafter, and I’ve been coding in some capacity ever since.

Over the years I have worked as a web and database programmer, with most of that focus being around ASP, ColdFusion, Javascript, VBScript, SQL and some PHP, AJAX and Jscript. I have worked primarily as a Visual Effects artist and programmed tools and scripts in MaxScript and MEL for 3DS Max and Maya respectively. I have programmed extensively in Python for Maya, Shotgun, Nuke, Mari, Photoshop and a whole host of stand-alone applications.

In the end, I like to say this: Computers rule the planet. They’ve taken over and run everything. If you don’t want to end up as one of the slaves, then you’d better learn the language of our new overlords. Being able to program takes my already vast skill set and makes it all the more palatable. I’ve solved problems for many people and companies. Let me do the same for you.